We Are Here To Serve You

Call 911 for an emergencies only. 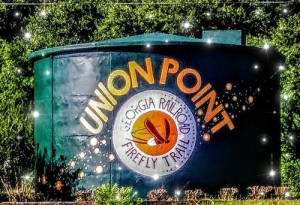 Developed from a railroad junction in 1834 and later chartered in 1904, Union Point is loaded with history. Locations like the former Chipman Union Hosiery Mill, a historic mill complex of 20 buildings was built in the late 1800s and operated for over 100 years and is now privately owned. Victorian residential homes, churches, and commercial structures are situated throughout the historic district and the Terrace Hotel Inn (now privately owned) was built in the 1800’s as an inn for the many train passengers that stopped in Union Point to change trains, or for resting. Traveling salesman known as “drummers” used the hotel as a base when selling their goods. Union Point was a resort for many coming from Savannah, Charleston, and Augusta.

In more recent years, Union Point has been working on several restoration projects.  The restoration of the 1940s movie theatre continues to be a project for the Downtown Development Authority and its volunteers.  Excitement abounds due to the development of the new Firefly Trail and Union Point’s mile which was completed in January 2021. This biking and walking trail leading from Athens to Union Point will be a huge asset to the community.  You may visit fireflytrail.com for more information on the trail.  And for more information on Union Point, feel free to call the City Hall at 706-486-4102.